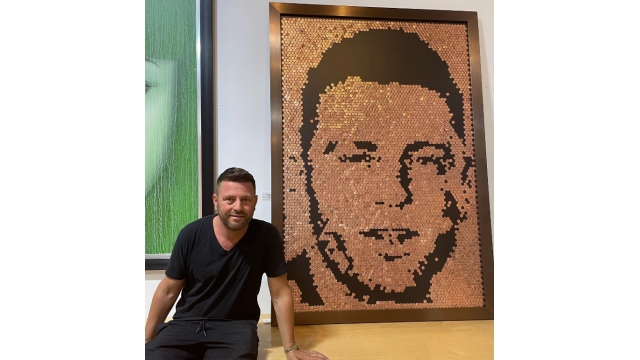 In June of 2022 Rock ‘n’ Roll icon, Elvis Presley arrived on the big screen in a Hollywood film, drawing fans in for a summer debut! Simultaneously, Elena Bulatova Fine Art highlighted a “Coin and Sequin” collection – featuring iconic faces like that of The King himself. Presley’s face hangs in a stunning metallic shimmer, mounted on a black background. Presley has forever inspired artistic and cultural works since he became a star. His image is instantly recognizable and has been the study of artists from Warhol to Koons. Artist Efi Mashiah has made similar tributes to the Rock ‘n’ Roll star in his “Line Up” series made using metallic paint on canvas.

Mashiah, co-owner of Elena Bulatova Fine Art, uses copper coins and reflective silver sequins to represent the faces of stars passed. Another star featured in the “Coin and Sequin” collection is the famous Marylin Monroe, which can be seen hanging in a stunning four-panel display in the Las Vegas gallery. Marilyn Monroe has long since been the subject of many Pop Art-inspired artwork. Her iconic face can be found on other artworks by Efi Mashiah, such as his “Brand Barrel” collections.

Mashiah uses several mediums to capture the faces of Hollywood, including the “Line Up” Series, “Lenticular Prints” and the Buma Project. Audrey Hepburn has been used in several mediums by the artist, as well as Bridget Bardot and Freddy Mercury. Another strong face currently hanging in copper glory, is the face of young Johnny Cash.

Elena Bulatova Fine Art features elaborate collages, handmade with paper and paint featuring the faces of Twiggy, Bridget Bardot, and Abraham Lincoln! The likeness and the detail have inspired collectors to have their own portraits done in likeness. These amazing artworks by Efi Mashiah bring a classic feel and a Rock ‘n’ Roll edge or an old Hollywood glamour to any interior!